I received a free copy of this book, thanks to Houghton Mifflin Harcourt and NetGalley, in exchange for my honest review. This does not affect my opinions on the book. 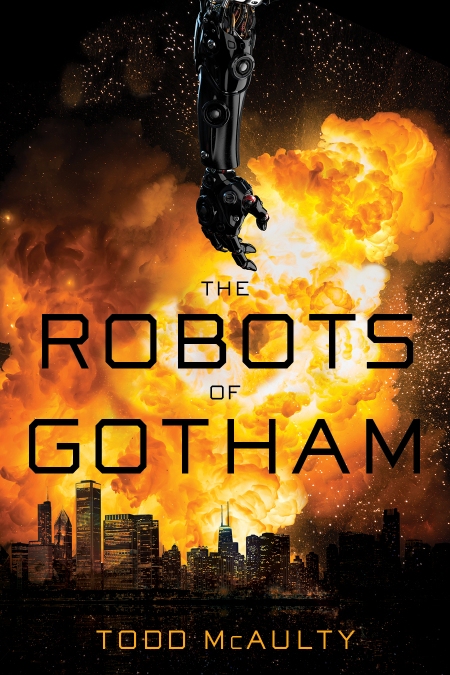 Book Blurb:
A thrilling adventure in a world one step away from total subjugation by machines After long years of war, the United States has sued for peace, yielding to a brutal coalition of nations ruled by fascist machines. One quarter of the country is under foreign occupation. Manhattan has been annexed by a weird robot monarchy, and in Tennessee, a permanent peace is being delicately negotiated between the battered remnants of the U.S. government and an envoy of implacable machines.

Canadian businessman Barry Simcoe arrives in occupied Chicago days before his hotel is attacked by a rogue war machine. In the aftermath, he meets a dedicated Russian medic with the occupying army, and 19 Black Winter, a badly damaged robot. Together they stumble on a machine conspiracy to unleash a horrific plague—and learn that the fabled American resistance is not as extinct as everyone believes.

Simcoe races against time to prevent the extermination of all life on the continent . . . and uncover a secret that America’s machine conquerors are desperate to keep hidden.

If you ask me why I love stories with robots I wouldn’t have a sure answer. I just do. Maybe it’s because I watched them in Terminator or I, Robot and loved the steely thrill of the rogue AIs, or it could be something else.

The Robots of Gotham doesn’t just have scary robots, it has the whole range! From good to bad, sentient to lifeless, sarcastic to loyal, it’s a world where robots have advanced so much they’re citizens. Presidents, even!

Narrated in a private blog format that our main character records and converts into text format(how cool is that? It’d make blogging so much easier!), we’re taken on a high-stakes, tense and exciting mission which our man, Barry Simcoe, is reluctantly sucked into. He’s a gallant and sarky Canadian who, appearance-wise, doesn’t look like your typical hero and would very much like to keep his life, thank you. Despite that, through brash courage, the help of a Russian workaholic and some highly intelligent robots, and sheer luck, he’s catapulted into a robot conspiracy that could spell the end of human life.

I think there will be a sequel but don’t worry, it doesn’t end with a cliffhanger, most things are tied up and you feel like this chapter of the story has reached its conclusion. I didn’t much enjoy the politics side to it mainly ’cause it zoned me out, but that’s a personal preference and I do acknowledge that it was mostly necessary.

You know sometimes when you read a book you don’t want to stop to take notes so you can write a great review later because there’s just TOO MUCH to jot down? That’s what it was like for Todd McAulty’s book. The Robots of Gotham is intelligent, diverse, wry, bromantic and dangerous. Also a thick book, it took me a bit of time to finish it. As long as there’s scary robot scenes and spooky places in the sequel, I’ll be up for it!

8 thoughts on “Book Review: The Robots of Gotham by Todd McAulty”